Watching the new season of Orange is the new black, so thought i would throw out another post while i have a lazy PJ Saturday! 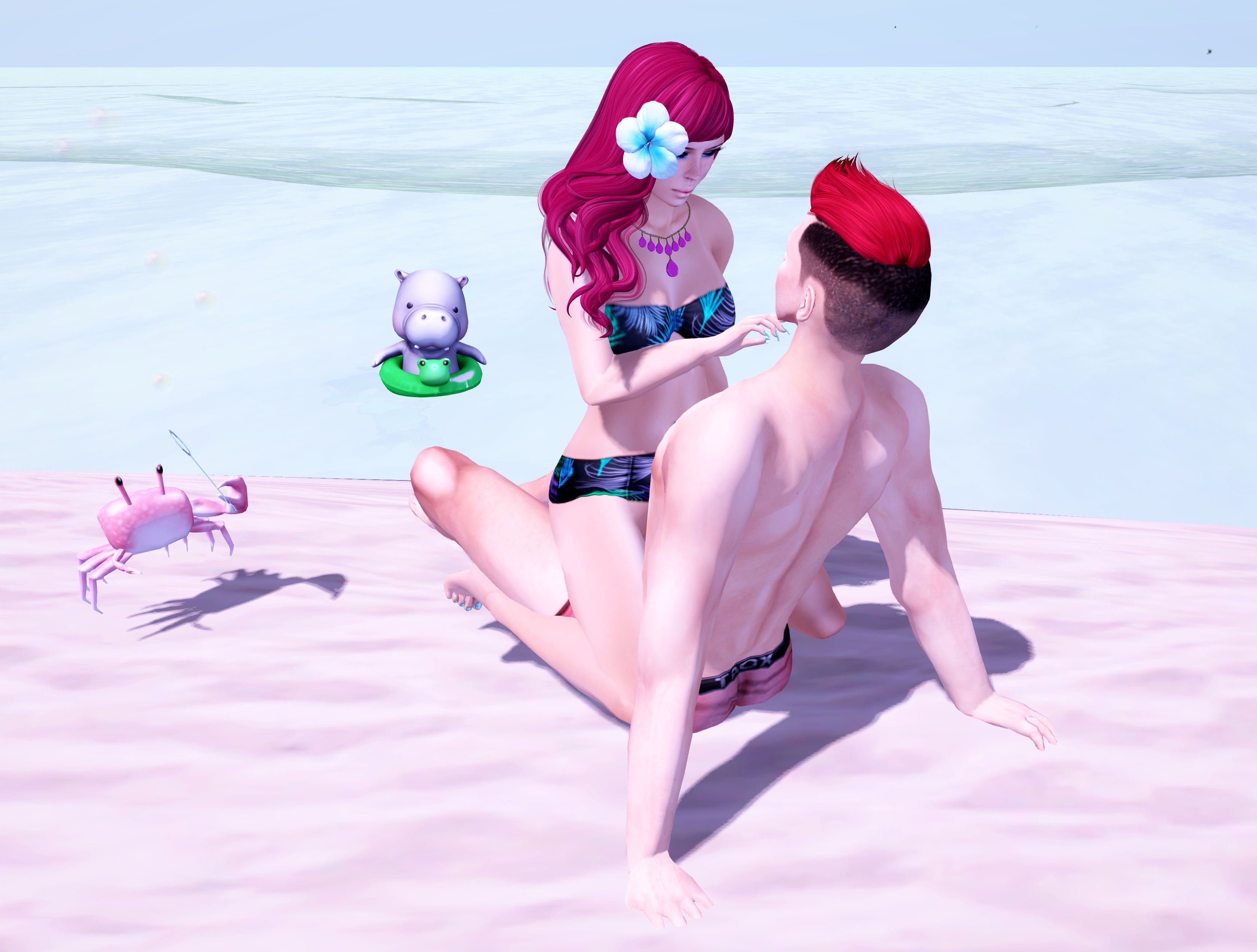 I love this romper! ♥ All deets below – Hopefully i will start to make it back more regularly but for now i will say see you when i see you! ♥ 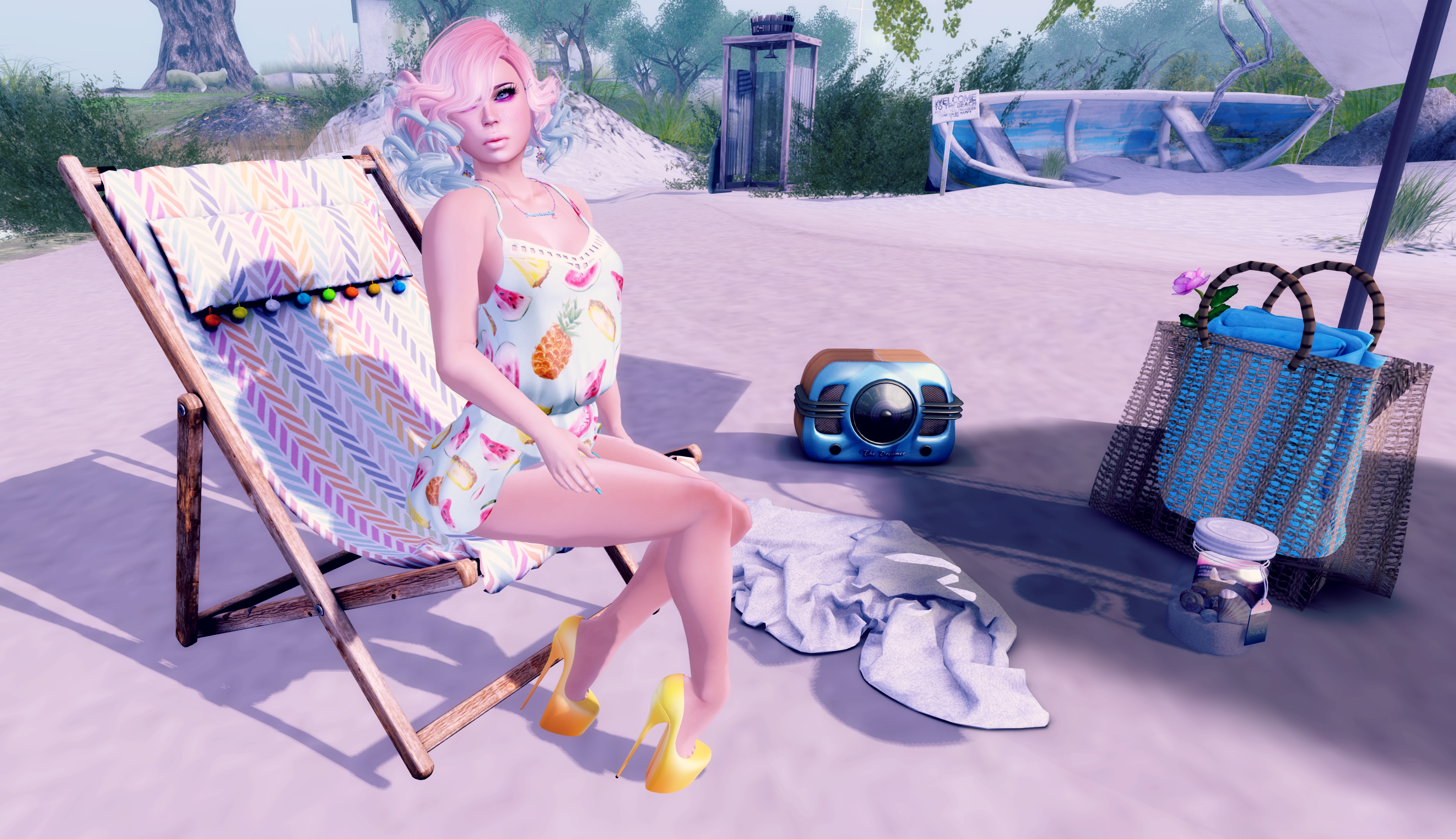 Not everything is black and white!

Hello all, Can’t believe it’s Friday already! Time flies lol Talking of time flying i went on my 2nd round of christmas shopping in RL today, I know its crazy, but i’m organised what can i say and spreading the cost over time helps also stores aint full of manic last minute shoppers yet so when everyone else flying around like crazy i will be sitting back all done haha none of that shopping stress for me! 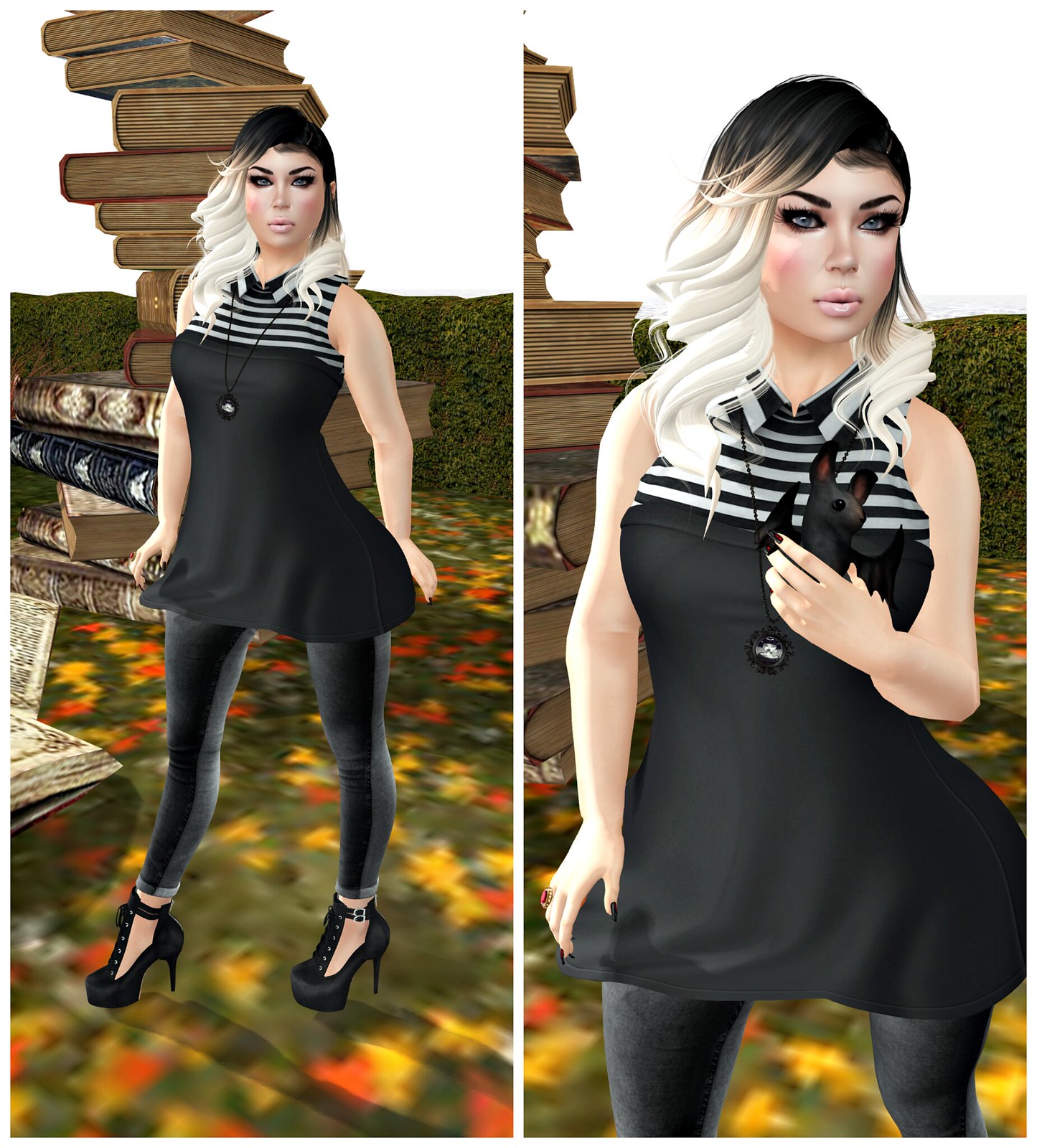 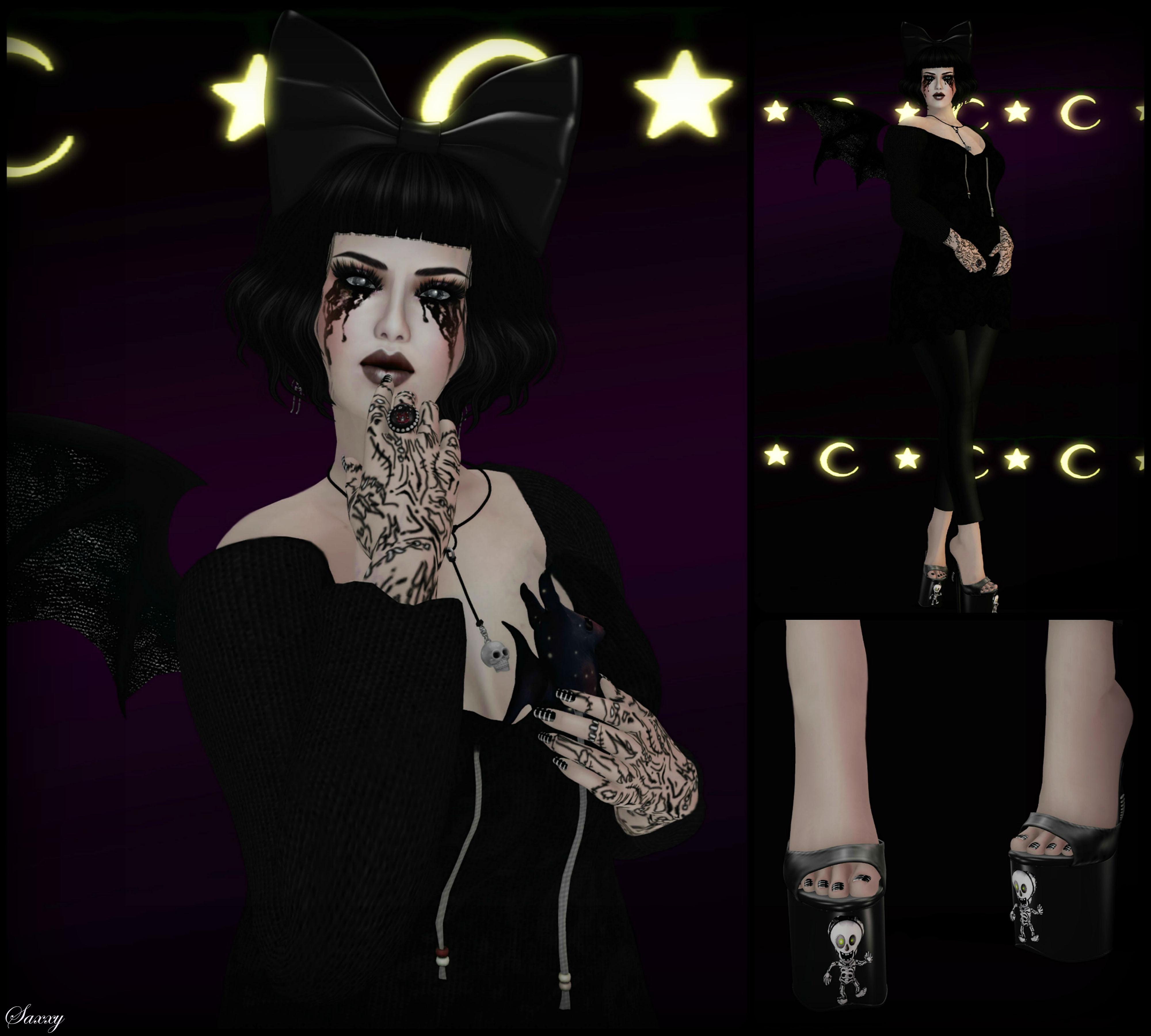 Well it’s Saturday and I had a mouthful to say but I am kinda running low on energy today. So I will post the pic and details. Sorry about the vague post, I will be back to the talkative old me soon. Just grab some of the links below and shop till ya drop! 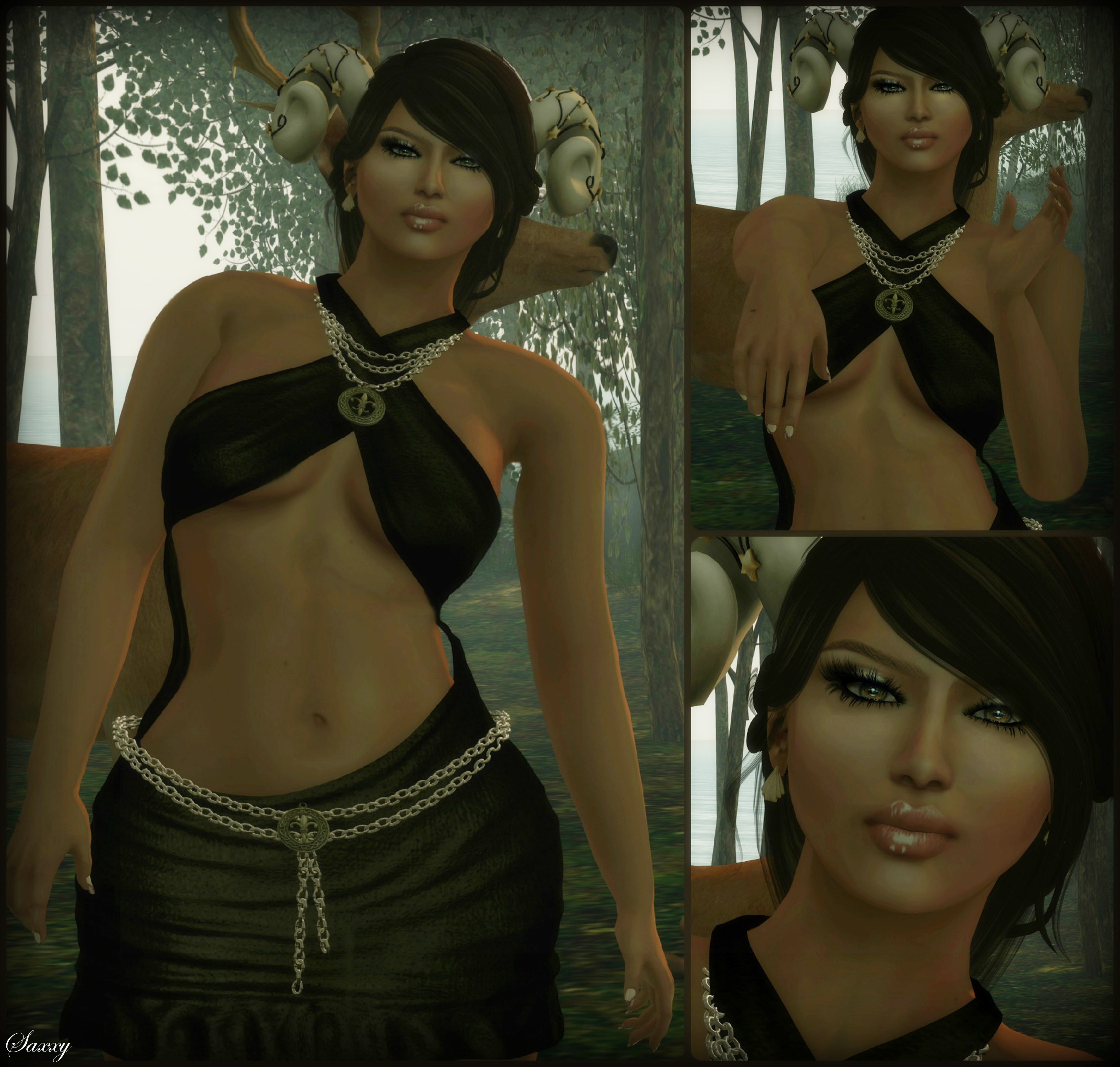 Hello all 🙂 I am really appreciating the pictures being added to the Done Wiv a Twist Flickr group and I must say, I am GLAD I am not judging because there are so many beautiful pictures available 😀

Today I am blogging on a new makeup set from MUA and an outfit that is available in several colors for 25l (only for this Tuesday).

Remember to submit contest pictures on Flickr by the 3rd of October!

Ice Cream on the Pier

Just a brief amount of words today cause i have been out, and i’m going out again soooon, gotta make the most of it when the sun is out here in the UK.. and today its sooo nice! This the perfect look for how Summary i feel today 😀 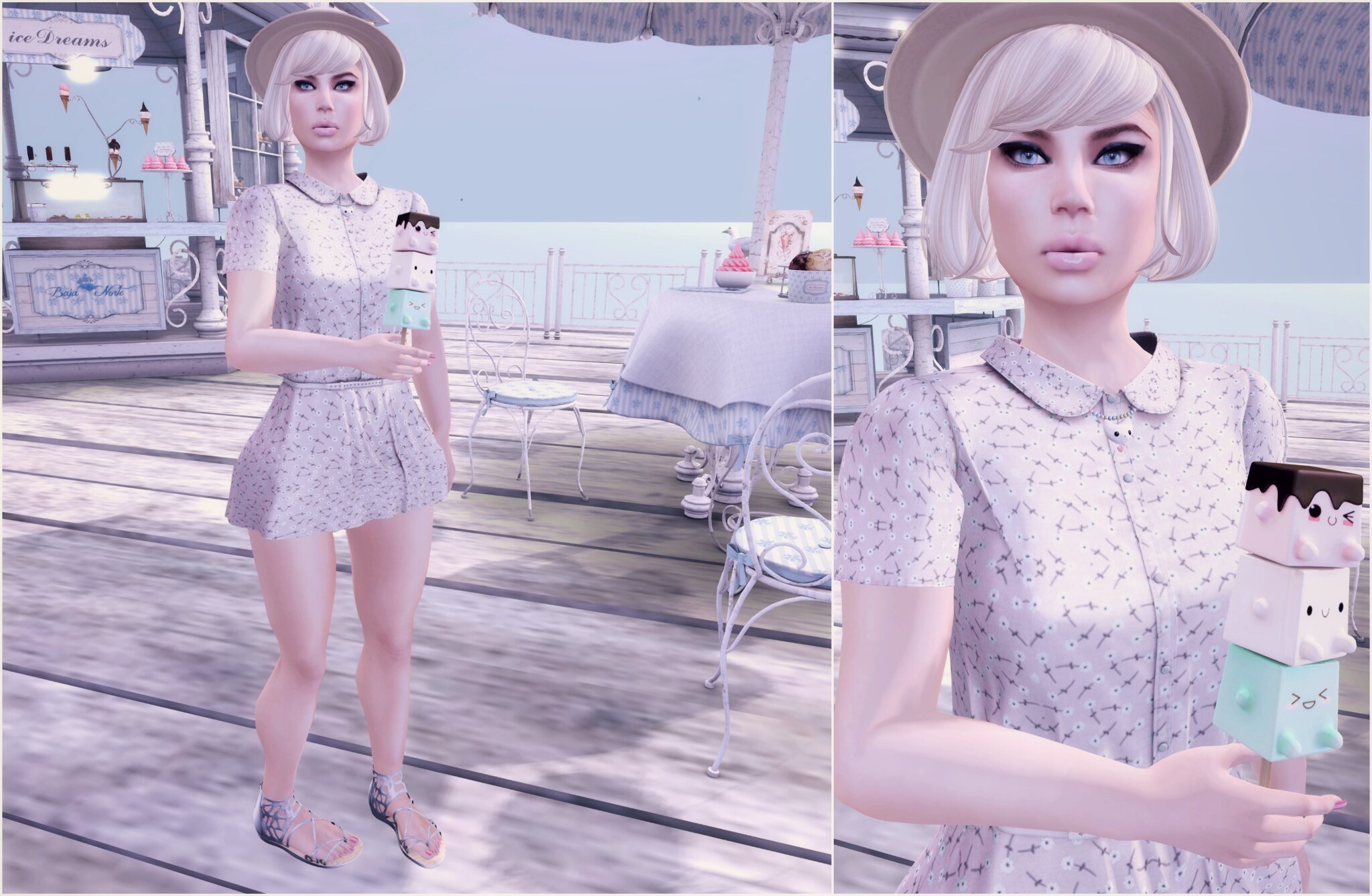 School’s OUT For the Summer

Not really, not yet! Almost. Five more classes and then F I N A L S, Lets hope that all the second life college students, like me, can get through this time of “I am going to kill myself or someone else.”

ARISE is doing all kinds of cool things! Sucide Dollz is where you can find my nose Septum and my Blouse is at the Monochromatic Fair! My grungy textured heels are still up for grabs at CSR – which is coming to a end soon, so get there before it is to late! I added a school girl look with my little plaid skirt from I AM FASHION and some knee stockings from PerveTTe.

I hope everyone had a fantastic holiday! Now, I am ready for summer  *waits (no so) patiently* 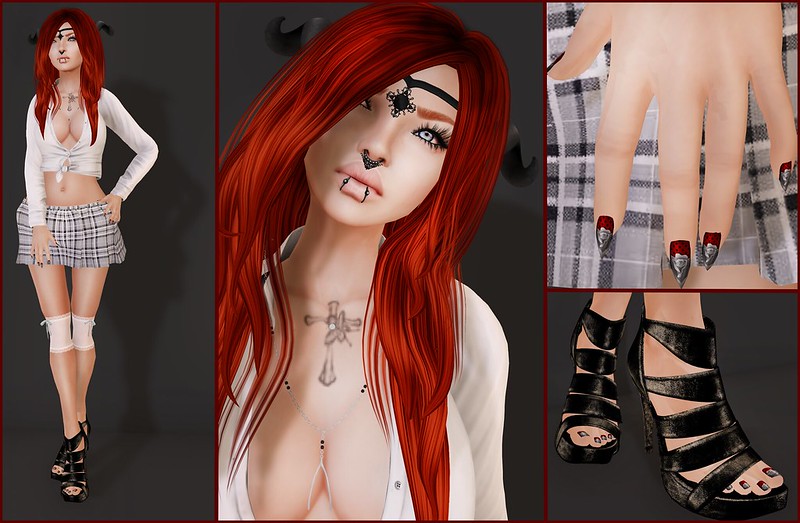 You know, lately I have been feeling down. I do the whole ” Am I a good enough blogger? ” and ” Why can’t  I get into better groups, etc ” and I can really drag myself throw the mud and make myself feel like a poop stick. I do not always have a lot to work with, like many other bloggers, but you know what? We do the absolute best with what we do have and make a style that others can be inspired from, which is what we are really here for. I may not have money to put into this like I want, and I am not represent the biggest or most popular stores, but I respect the designers  that let me blog for them and “little” or “new” stores and they make some of the most original designs, so do not get to down on yourselves!

BUT back to business! The heart lace top I am wearing is currently at Cosmopolitan Sales Room in black and white! It really looks good with Lolas applied and without them. My lace socks are part a short / lace set at PerveTTe and my skirt is like the coolest thing ever and comes in a bunch of pretty pastel colors. Speaking of pastels, these heels also come in beautiful colors, and have the cutest little bows. If you like lower, dainty, and girly heels, LVLE is the place for you.

Also, P O S E F A I R. Elephante poses is there ( like Skyla said in her ” First Time In Forever Post ” ) and you can find my dandelion prop and pose there! 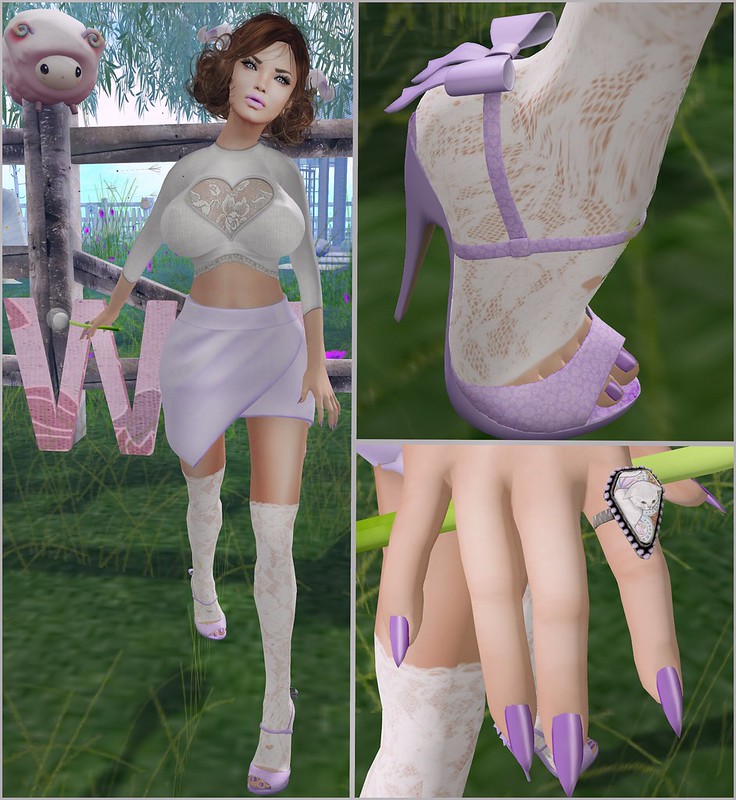 Lately I have been feeling disconnected from some aspects of Secondlife, and I sort of dislike it a lot. I feel a lone, and that has lead me to do a lot of exploring, which in a way is a good thing. Half Deer is one of my favorite stores and I was able to go and look at their sim ( where I took these pictures ) and it is beautiful. I felt warm and happy with this outfit, It is very fitting for the weather I am having in RL, finally. My favorite part(s) about this outfit HAVE to be the lace shorts with showing pockets from Buttery Toast, and I really love this LVLE slip on shoes, which come in children sizes also! I am also showing off Curve It poses – like Sax in her last post, mine is just a different one! Same price as the ones she posted ( 50L ) and they are perfect in my opinion. The hands lay very nicely and they show off shoes really well.

I hope everyone is having a fantastic weekend! I am just trying to get back into the swing of things. 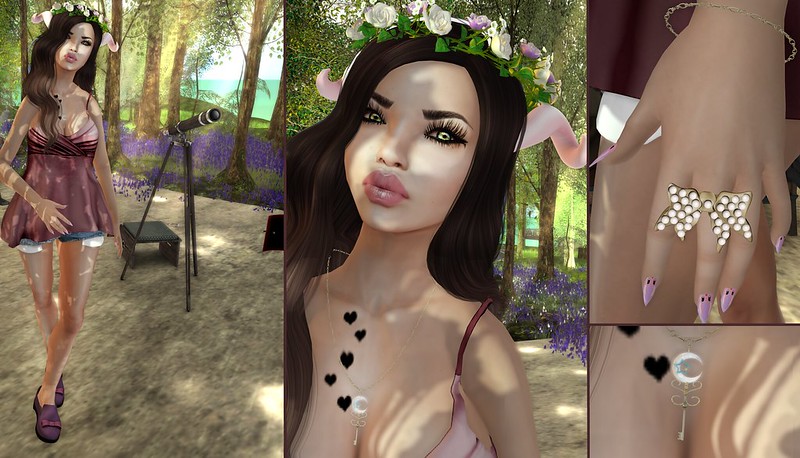 Hello all! Well first and foremost we are under tornado watch until 7pm my time so um I tried to rush and put dinner in the crockpot before that time just in case we lose power. I am pretty sure we will be fine but if you don’t hear from me in a while……LOL…I’m kidding I doubt we will get anything worse than rain at this point. This post is based on a soap box rant so I would rather you skip by it if you can’t handle ya know the strong opinions of others. Ty Ally and Marissa for inspiring me to do this post and have the finger strength to type this lol. Ok so before I go onto the rant, this is actually a pose from Something New. It comes with your very own soapbox and megaphone. This sexy dress is from Ducknipple and comes in solids and patterns with their HUDs. Make sure to check out their new stuff, it is always affordable and has variety in color with their HUDs.

Now the sheep are rather cute don’t get me wrong I love them. But in this post they are supposed to be representing those who follow bandwagons cause they do not have a mind of their own. The sheep who follow the circles that are “popular” the “stuck ups” and of course the people who think their fucking shit doesn’t stink. Sheep can be cute, ugly, fat, skinny,black,white, brown, purple, who gives a fuck…they are hidden behind the exterior of their own fake face. Maybe pick up a damn book and learn a thing or two of individualism. Oh and go to Wal-Mart and see if you can pick up a personality while you are at it.

Next are those who take no considerations of decisions people have when it comes to religion,political views, and sexual orientation. If you are gay, be happy about it and let people LIVE for that decision. At the same time, some of the people who have chosen that lifestyle need to realize that there are still straight people out there and we all have our likes and dislikes. Trying to force your opinion on someone else is not the fucking right thing to do. Fuck your freedom of speech in that case, cause there is a difference of saying it in a nice way and just being a fucking asshat about it. Political views….lawd…if you do NOT like our government and what is going on…make your own difference when it comes to voting. If it doesn’t go your way too fucking bad, at least you tried. You think I was fucking happy and shit when Bush came into office? Did I go around bashing him? No! So stfu. No use in crying over spilled milk, clean that shit up! I voted for Obama<<my decision! You don’t like him? Your decision…will I look at you any less? No. Accept my decision as well though. I never bring up politics because I know way too many people who dislike him. Bashing him in my face though repeatedly like you are some fucking repetitive rapper though makes you look like an asshole. Plain and simple. Religion is up next cause holy shit “HE” doesn’t exist. Once again, everyone is entitled to their opinions. I am Catholic, I believe in God, Jesus Christ, the Virgin Mary, and so on. Ok, I am not such a tightwad and I will laugh along with some of the memes and jokes about the subject, but there is a line not to cross about it. Do NOT EVER make me go against my religion. I have my own faith and my morals. It is something I grew up with and I will never lose faith. Keep the scientific bullshit to yourself. It is not about proof, it is the fact that I was raised to believe in Him and I can never be persuaded otherwise. I don’t go around preaching the word of God to anyone, take the consideration of not spoiling shit for me. Someone wise told me that it is funny how self proclaimed atheists say the term “oh my God” or OMG lol. I’m just saying. #_#

Also, if you are in a relationship….let people be in relationships and be happy for them! Don’t go trying to rain on people’s parade cause you are some lonely cockstain. You wanna be a whore? Hey by all means do you boo boo but do it with someone who understands your whore needs who isn’t taken! FFS.

Anywho, this is all I had to say on my soapbox. You may agree with it and I personally don’t care if you don’t, it is my rant, my words, my thoughts, if you got all butthurt, contact 1-800-EAT-ADICK for a free consultation.

Makeup: A little Drama in Pink and Teal-Elymode

Shoes: Cassidy Heels in Wood(comes in other colors but black was available only for the 21 event)-CASHMERE & Keane 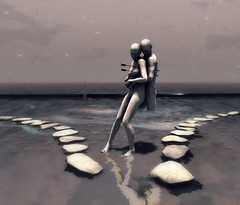 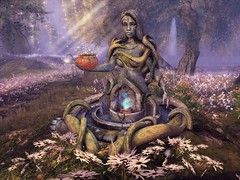 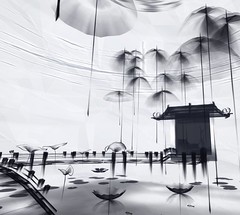 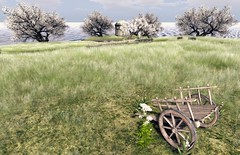 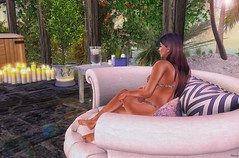 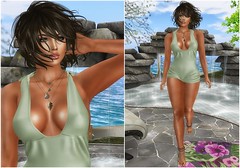